During the March 2015 ice trial cruise a Internet traffic database was implemented to start measuring how Sikuliaq Internet bandwidth is being used. As part of the Iridum Traffic analysis it was noted that a larger than expected amount of Internet traffic was being used by the shp-dnsmasq-0 server. Note that the DNS traffic by Destination being sent to 137.229.15.5 on UDP port 53 is the 3rd highest destination for Internet traffic: 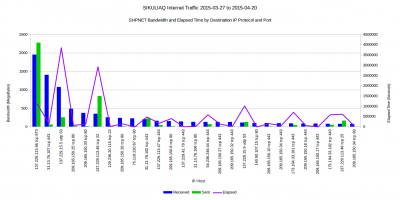 During the process of configuring the new shp-dns-0 DNS server it was discovered that there was a significant amount of Internet traffic being generated by the legacy shp-dnsmasq-0 and shp-dnsmasq-1 servers. When a DNS request is made to a DNS server if the server knows how to answer the request is returns the IP to the requesting computer. But if it does not know the answer it will forward the request up the chain to what are called recursive DNS servers. Ideally we want all DNS requests for all ship side sikuliaq.alaska.edu IP addresses to be answered locally by the ship side DNS servers instead of having to forward these request out to the Internet. Most IP networks today still use IP version 4 (IPv4). However, IP version 6 (IPv6) has been ready for years. For reasons we won't go into, most networks have not migrated over to IPv6 yet. Suffice it to say, Sikuliaq's network is 100% IPv4. Thus we only implemented IPv4 DNS on the DNS servers. However, it turns out that most clients are requesting both IPv6 and IPv4 addresses from the DNS servers. Our DNS servers were serving the IPv4 IPs just fine. But were forwarding the IPv6 DNS request upstream over the Internet to the UAF DNS server.

This problem was solved with the new DNS servers, shp-dns-0 and shp-dns-1 by serving the IPv6 version of the IPv4 address via the DNSMasq configuration on these servers. This yielded a reduction in Internet bound DNS traffic by a factor of 176!